Written by
Marianne
Posted in
All, iceclimbing
Comments
Leave a comment

After  three weeks of competition climbing we are on the road again.

This time not with our beloved VW T3 Syncro campervan, but with a simple rental car. No warm home, kitchen, bookshelf full of climbing guidebooks, and our sweet little bed.
Just before the start of the Rabenstein IWC the gearbox decided to bail on us. Not a chance that they’d have a gearbox like ours in Italy.
Actually, getting the car to the garage was the biggest challenge. 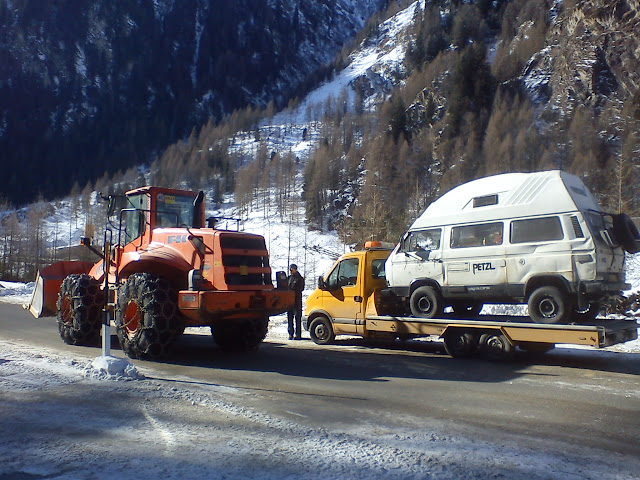 Markus Bendler, who decided to retire from Worldcup climbing after Rabenstein told us Bad Gastein was one of the more interesting places for proper Austrian ice right now.
A snowy ride through Austria brought us in Bad Gastein. As we don’t have heating and the kitchen in the car we found a place to sleep in the “Euro Youth Hotel”.
With some very good advice from the local hero Hans Zlöbl who also wrote the guidebook with Sepp Inhöger we diceded a good starting route would be the classic “Mordor” in ”Eisarena”, just up the valley from Bad Gastein.
After dinner Marianne tells me she is not feeling really well. I totally understand where she is going through. I din’t recover very well from my fever after Korea.
So we decided to go to sleep and see in the morning.
After a feverish warm-cold-hot-sweat night Marianne isn’t feeling good. But she decides that we “have” to climb. So we have a good breakfast and head out.
We arived at the parking up after Böckstein around 8:30 to find 6 other cars in place and loads of people walking up… 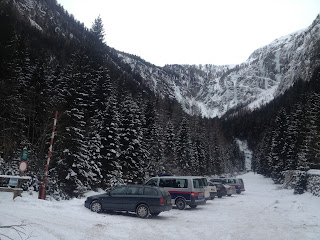 Our own walk up, takes us ages, every ten steps we have to gain our breathe again. Not becuase we’re Dutch and not used to the height, but becuase we probably both are still in a bad fever.

When we arive at the bottom of the route there is a line of 2 parties for Mordor. 2 parties for Rodeo. The only route free is Supervisor the WI6. So my first ice route this season will be the grand classic WI6. 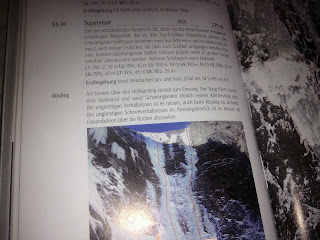 The parties next to us like to talk loud and bright and some turn out to be talented rock, axe and ice throwers. There were two big winners: one who pulled out a block the size of a good sized radio in the second pitch of Rodeo, the other got full points for dropping his iceaxe down the cliff in the fourth pitch of Rodeo… 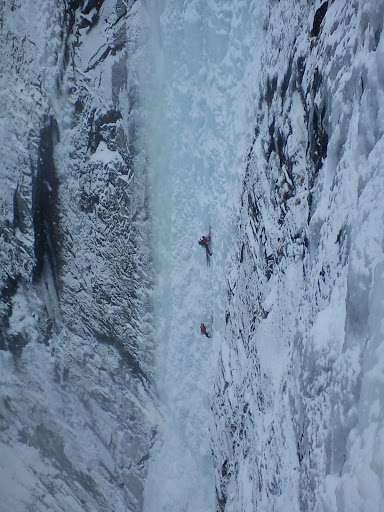 Dennis felt ‘tensioned’ with all the activity next to him, I noticed it made in pretty insecure and he wasn’t too fast in the first pitches.
I wasn’t faster then him at all. Soreness in my whole body, headache and out of breathe with every move. I was happy the ice wasn’t too hard so I only had to swing once in every move. 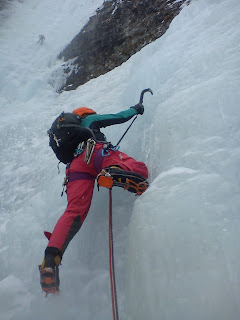 The higher we climbed the harder it became. Dennis didn’t feel any better when he noticed he should have tightened his frontpoints on his crampons. They were loose as shit and ‘trembled’ with every kick and move.
That was just one of the little details you forget when you haven’t climbed ice yet this season.
He also figured his mixed picks on his axes weren’t made for blobby ticky WI6 pitches. As we first wanted to do the easy Mordor or the mixed route Rodeo, we both had our mixed picks on our axes. The extra teeth make the picks sink in well, but it makes it a pain getting them out again.
My picks were doing better as I already filed off the extra teeth. 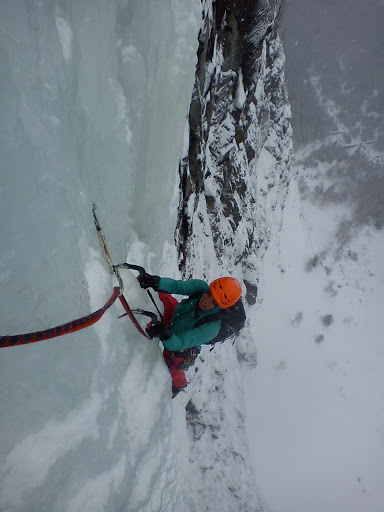 The higher we got the more difficult the climbing, but our bodies went souple through the ice. Even with every breathe I had to take :)
When you’re seconding climbing big flowers is fun hooking your way up. But while I was leading the flowers felt really insecure. And those coliflowers won’t give any good spots to put screws in. 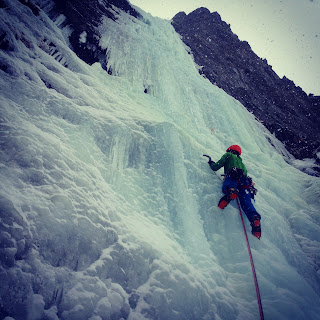 Next problem was our rope.
We like to stretch out pitches. Climb the full ropelength up to 50 or 60m.
Our rope is getting old and thin ropes are expensive…
The rope was totally soaked after the first pitch. It made it super hard to pull up and even belaying became impossible with a Reverso on the half frozen soaked rope.
On the single last pitch I belayed in my downjacket. The snow wettening the jacket and soon the puffy became like wet toiletpaper wrapped around my feverish body.
I knew what was going to be next and I so wasn’t looking forward to that…
At the same Time I (Dennis ) was working on my squats. Pulling the rope up that seemed to be pulled down even harder every meter is was ascending. 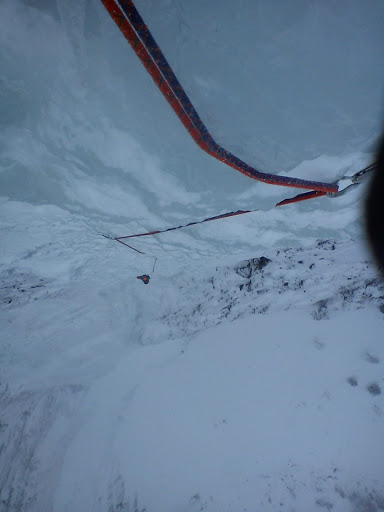 Every iceclimber knows when you get it: walk up, cool down, then start to climb when you’re cold and then it starts: screaming barfeys. Called after the things you want to do then: cry, scream and you’ll have the feeling of throwing up (or you actually do throw up).
Once you’ve gone through it, it won’ hit you again for a while.
I cried when I reached the belay.
Dennis thought I wanted to return as I wasn’t feeling well, but with just one long pitch left I couldn’t resist: need-to-climb-ice-now.
The last pitch started tricky and topped out in the wet ice. Dennis traversed from our belay to the middle of the ice getting to the more stable part of the slightly overhanging wall.
We rappeled over the old ‘tv-bolts’ through the dozens of frozen Edelweiss flowers and slid down to the car through the thick layer of fresh snow.
A perfect occlusion after a great day in the Mountains. 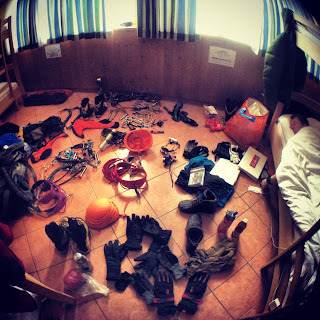